In these bodies of work, ground is the subject: the ground we stand on, the ground of the work of art. David Maisel has photographed the topography around Utah’s Great Salt Lake from the sky. The roughly geometrical forms, as well as the startling coloration, result from the combined activity of human and natural processes. Painter Ingrid Calame has stayed closer to earth, tracing water marks, tire tracks, and myriad spills on concrete or asphalt. She overlays these tracings to create a single work, outlining or filling in shapes with saturated color. (There is a wonderful photograph on the Internet of Calame in the process of drawing, paper spread on the floor, the artist squatting low to the ground, a studio cat resting comfortably on the horizontal slab of her back.)

Each ground becomes an index: the earth a repository of nature and humanity; the works a second-order imprint of those impressions. Humans scratch and soil the earth. Light hits emulsion, and pen touches paper. It's all about surfaces and the marks upon them. 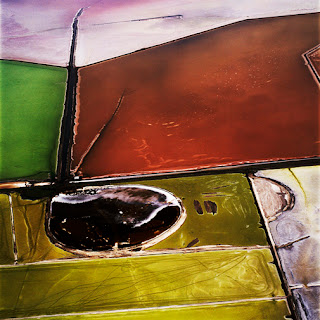 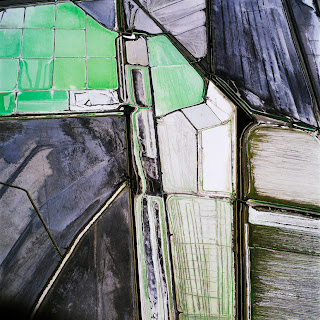 from #274 drawing (tracing from the indianapolis motor speedway), 2008, oil paint on aluminum 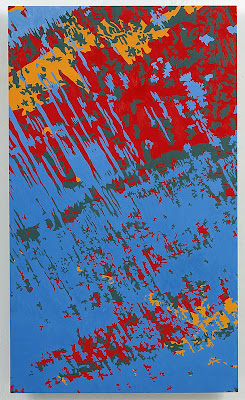 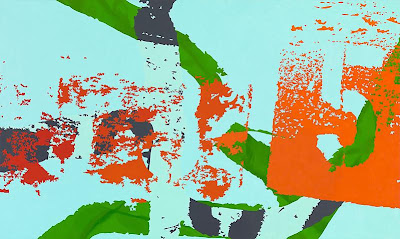 Posted by john rosewall at 10:53 AM No comments: 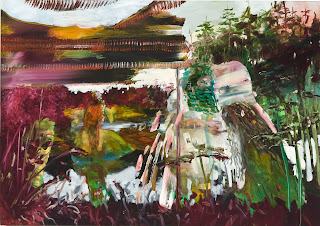 the glory shapey thing, 2011, oil and acrylic on canvas (sic) 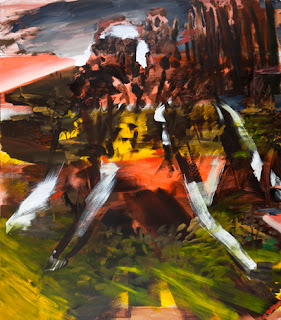 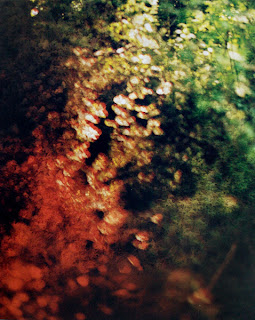 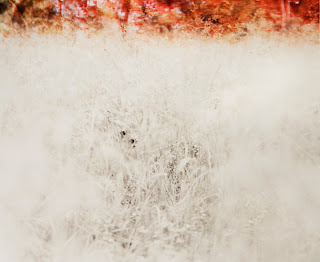 Posted by john rosewall at 9:44 PM No comments:

The relationship between one thing and its other is crucial in the history of photography, as everyone knows by now. The Pictorialists saw painting as archetype and model, and the revolutionary Modernist Moholy-Nagy made photographic images that closely resembled his paintings. Straight photographers, the f64 group, and the New York school of street documentarians, on the other hand, insisted upon a vision that was relentlessly photographic. Did this push and pull between attraction and repulsion also work the other way around? Painting’s early disdain for photography is well documented, but not the immediate influence that photography obviously had on painting. Where did the Impressionists get that contingent, cut-off-at-the-edge framing, just decades after Fox Talbot, if not from the way a scene in the world must be squeezed onto the unforgiving rectangle of a ground glass? In an interview once, Cartier-Bresson—who studied with the painter André Lhote before picking up a Leica—reported seeing a small reproduction of Caillebotte’s Paris Street; Rainy Day and thinking for a moment that it was one of his own photographs. Maybe somebody had put pineapple juice in the master’s pineapple juice.

According to Howard Halle, in his essay “Photo-unrealism,” there isn’t any reason left to make distinctions between the mediums. “If it hangs on a wall and compels you to take a look, it’s painting,” he writes. Critics do still talk about photography on the one hand, painting on the other, and they do still tend to cast photography in relation to painting, and not the other way around—saying, for example, that Jeff Wall makes photographs rivaling the scale and scope of a canvas by David. This is only logical, since painting got there first. But the premise of my blog is that we have reached a next stage, where photography and painting now swirl around in the same flask together. I am focusing here on new abstraction, where the correspondences between the mediums seem the most rich and promising, and where a batch of young photographers are now emerging onto the gallery scene. Recent developments in photography, regarding both the formal issues of the works and the technologies with which those works are made, have brought the mediums into increasingly close dialogue, to the extent that it is almost beside the point to make a distinction between them, and to the degree that a viewer can be forgiven if he or she can’t tell one from the other at first glance. Chris Wiley, in the November/December 2011 Frieze (here is the link), has pointed out a couple of ways that contemporary photographers are exploring formal issues that originiated in painting. I have used his discussion as a starting point for this blog, though I hope to find correspondences that transcend form and move into the area of intention and theme. We’ll have to see what the territory reveals on that one.

In each of my posts thus far, I have paired a photographer and a painter whose work invites formal comparison. I have juxtaposed Mariah Robertson, whose photographs experiment with the demands of the physical support—in other words, with how the images hang—and the painter Sam Gilliam, whose unstretched canvases, like Robertson’s unbroken rolls of photographic imagery, engage not only the gallery wall but also its ceiling and floor, dangling in colorful loops and folds that seem to be carelessly and carefully placed by turns. I have paired Josh Brand’s photograms with the paintings of Tomma Abts; these artists share not only a dedication to anachronistically small scale, but also an interest in the effect of analogous colors, in geometry, and in the old conflict between flatness and depth. I’ve taken the liberty of including some of my own photographic work, which I’ve placed in relation to the paintings of Iva Gueorguieva. Beyond any formal resemblance that might exist between our images, I imagine that Gueorguieva must share my fascination with the tension between chaos and order, not only in a work of art, but as an aspect of the world at large.

In a realm of expanded fields, artistic plurality, and the rejection of medium specificity, what will happen to the one and its other, to photography and painting, on the grounds of abstraction? It will be the purpose of this blog to provide an ongoing survey of the terrain.
Posted by john rosewall at 10:13 AM No comments:

quiet adventures in the visual field 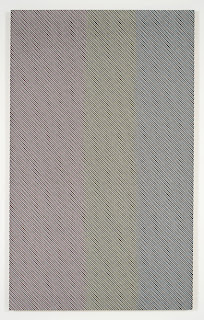 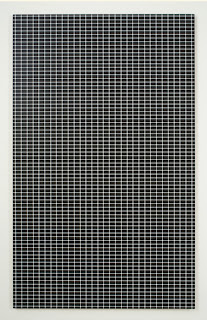 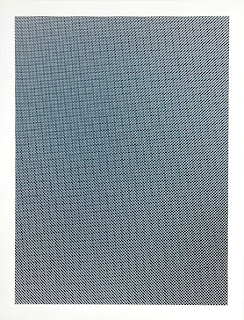 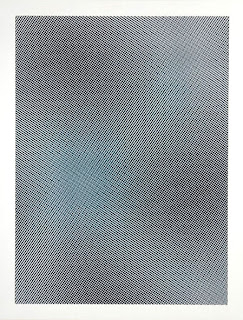 Posted by john rosewall at 8:43 AM No comments:

jagged lines for a lucky day 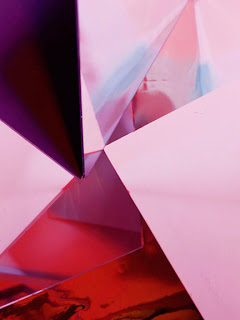 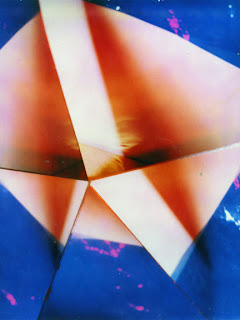 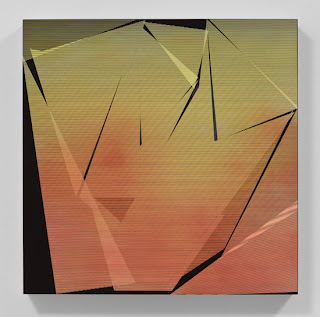 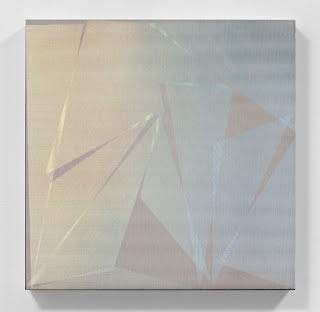 Posted by john rosewall at 9:31 AM No comments:

over under sideways down 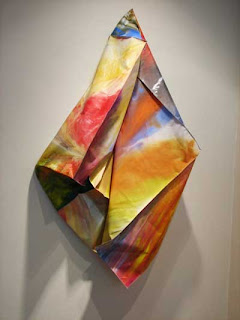 close to trees, 2011, acrylic, polypropylene, nylon and a mirror 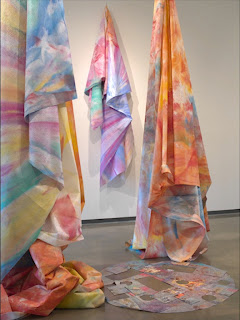 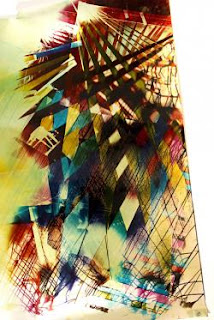 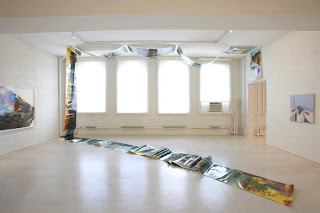 Posted by john rosewall at 8:30 AM No comments: 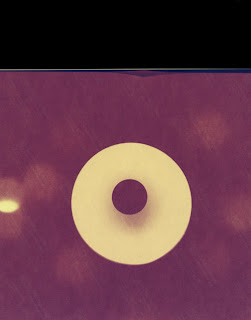 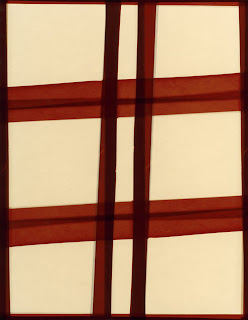 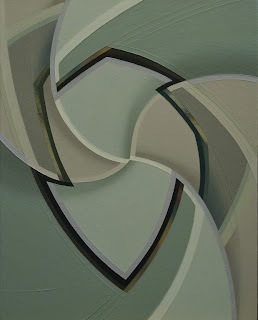 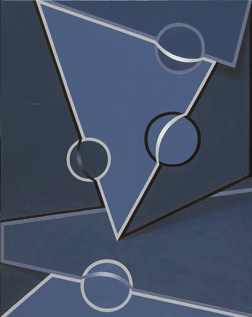 Posted by john rosewall at 5:44 PM No comments:

and while we're at it

Chris Wiley in the November/December issue of Frieze on the new experimental photography.

http://www.frieze.com/issue/article/depth-of-focus/
Posted by john rosewall at 5:44 PM No comments: 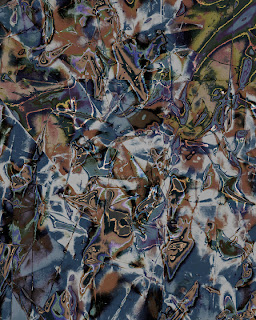 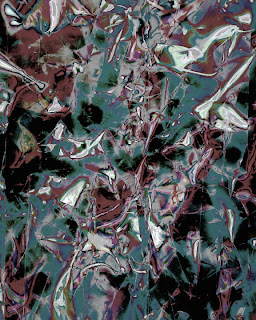 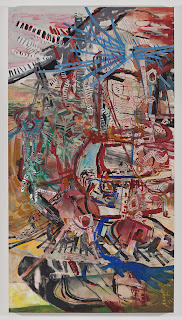 a stage above the catacombs, 2009, acrylic and collage on canvas