we're just living in it

With simultaneous exhibitions at two galleries here in Los Angeles, and with three booths at last month's Art Contemporary Los Angeles featuring his work, artist Sam Falls is the man of the hour. Of particular relevance to this blog is the fact that Falls combines photography and painting, applying acrylics and other media on top of photographs, in works that are true hybrids.

It's Sam Falls' world--at least for a month. Here are some images to help give us the lay of the land. 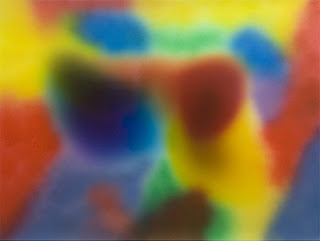 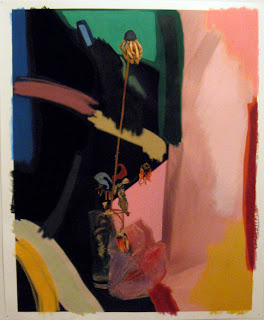 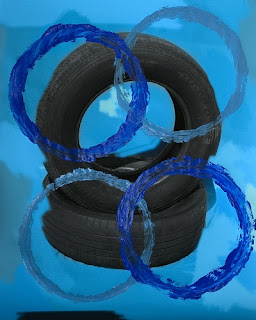 Posted by john rosewall at 7:59 AM No comments:

Here's Ed Moses in a recent L. A. Weekly:

"I'd like to make it very clear that I'm not creative and I'm not trying to express myself. I'm an explorer, I'm trying to discover things, discover the phenomenal world by examining it, by looking at it, by playing with the materiality, pushing it around, shoving it, throwing it in the air."

The idea that making art is a process of interacting with materials is hardly new, but it provides us with yet another way in which painting and photography are operating in the same space these days. As writers on photography have begun to point out, and as I've already discussed in earlier posts, photographers are conceiving of their works as physical objects just as painters have been doing for decades; and they are reacting to this physicality in ways that loosely parallel what painters have done before them. Mariah Robertson, for example, cuts her pictures into oblong trapezoids and lets them fall loosely within the confines of a box frame. It would probably be going too far to describe them as oddly shaped pieces of paper that just happen to have an image on one side--though one certainly feels the temptation to do so. In another example, Soo Kim handcuts her representational C-Prints and allows the trimmed pieces, still attached to the image surface like tabs, to curl delicately forward into the space of the viewer. As these artists demonstrate, the traditional view of the photographic image as a window onto the world, and of the photographic surface as the transparent vehicle for this image, is being contested in all sorts of ways; at the furthest end, it is being abandoned.

Marco Breuer is another of these photographers who directly engage the work as an object. But not just another: In fact he is a pioneer in the methodology of intervention, and has employed its logic more radically and single-mindedly than the artists I've already mentioned. Yet when one comes face to face with his work, it is often hard to see what he has done; in reproduction, it is next to impossible. This paradox is an effect of the radicality of his procedures. Whereas Kim or Robertson begin by making an image, and then come at the paper support as an object to be manipulated after the fact, Breuer uses physical intervention to create an image in the first place. He attacks photographic paper in various ways--by scratching it, abrading it, even dropping lit matches or sparklers onto it--before there is anything pictured on the surface. These physical acts themselves, in addition to light and chemistry, originate what we see. More than any other artist working today, Breuer engages the physical surface of his photographs, and by doing so forces his audience to confront the reality of what we are experiencing: a piece of paper that just happens to have an image on one side. 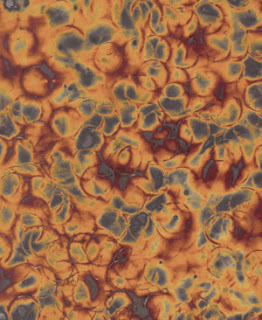 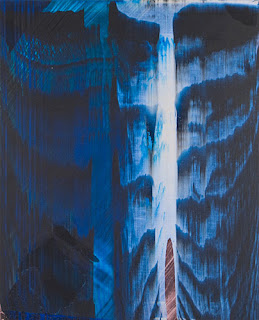 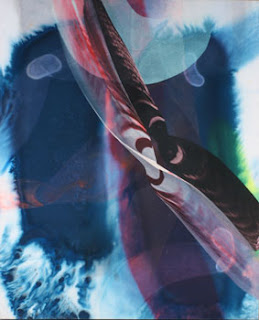 Posted by john rosewall at 8:16 AM No comments:

Although the focus of this blog is abstraction, I’ve chosen to post two artists this week for whom representational elements feature prominently in their work. Albert Ohlen and Michele Abeles arrange patterned fabric; printed words, numbers, or letters on paper; even images of disembodied torsos and limbs, amidst areas of vibrant color or harried squiggles of paint. The fact that we are dealing with objects--in the case of Abeles, almost exclusively--certainly makes us read the images differently than we would if they were completely non-objective. Yet because of the way the objects are deployed, they produce the kind of visuality that we associate with more traditional abstraction, based on vectors of energy, fields of texture and color, and marks from the artist's hand.

A second kind of abstraction results when these myriad objects, stripped of context and chosen, it seems, for their lack of cultural resonance, are made to exist in the same visual space as scumbled paint and bands of pure lavender. They end up registering on the same formal level as the more conventionally abstract features that accompany and sometimes obscure them. Language is reduced to visual texture, a bent limb to simply another kind of line. They don’t throw us back to the world of concepts the way an image of a gesticulating JFK or the word "blue" stenciled in red used to do. They are objects abstracted from meaning, free-floating signifiers signifying nothing but the impossibility of meaningful signification. What else is one to do with the amusingly ham-fisted rhyme of raw potatoes with male genitalia--the latter left teasingly out of the frame in one of Abeles' photographs? 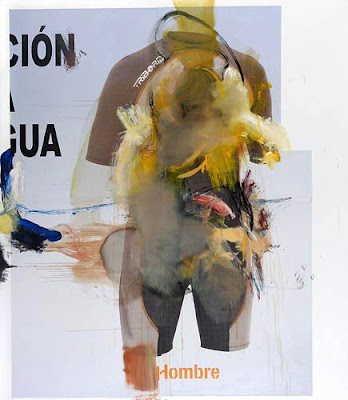 
Posted by john rosewall at 7:49 AM No comments:

In reproduction these works could almost be from the same artist. First we notice the austere middle gray and the lines that fall haphazardly, or meander desultorily, across the mostly uniform picture plane. Layers have been applied, then covered over, then partially erased again, built up, rubbed away, with all of this activity straining to reveal . . . nothing much, it turns out. These works are a kind of action painting—or action photography, if such a thing can exist—in which actions are repudiated much of the time, perhaps because they were half-hearted in the first place, or perhaps because, although process counts, results themselves are suspect.

But of course the paintings of Christopher Wool are large affairs, ab-ex large, made of enamel and ink (he silkscreens) on linen. Alone or in series, they dominate the gallery space and overwhelm the viewer. Anthony Pearson, on the other hand, keeps his pictures small, in the neighborhood of five by seven inches, so that one has to come up close and look hard. They are products of the darkroom, solarized silver gelatin photographs of drawings from his own hand. Importantly, they are almost always grouped with a sculpture, in repeatable installations that Pearson calls “arrangements.” One confronts a chair-sized sculpture of bronze in the front, and two photographs, matted and framed, on the wall behind it. Image and object correspond to varying degrees. Lines echo, forms nearly match, or there might be a similar appearance of patination. In fact the photographs I have posted are not intended to stand alone, but are details of two such arrangements.

When we allow ourselves to ignore otherwise essential considerations of scale and context, we are free to examine these works as instances of a common, though by no means ubiquitous, strain within today's abstraction. Each work derives from a process that one senses has been thoughtfully organized and deliberately performed, but the end result strikes one nevertheless as tentative, searching, and unresolved, as if the artist did not so much finish the work as abandon it in the final stages of production. It seems to be a way of saying: okay, that’s enough, there's no more progress to be made here. The piece might not be quite right, or quite finished, but nothing in the world ever is. 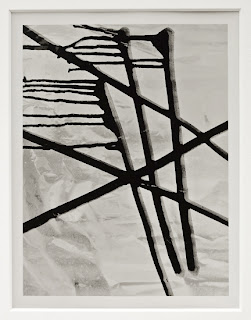 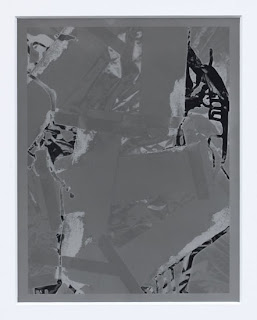 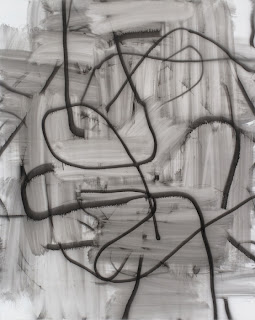 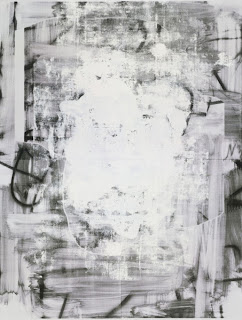 Posted by john rosewall at 7:50 AM No comments: