For the past couple of years, I’ve been painting violence. I base the paintings on photographs from press websites, blogs, and other online sources. In these images, which are pared down and modified from the original material, the victim is fully rendered while the perpetrator remains either unseen or represented by an arm or a hand, by a reach, a punch, a chokehold. What’s the point of representing this kind of violence when anyone with any political consciousness at all knows already that it’s happening? I don’t think I’m enlightening anyone, though I can certainly play the usual games. We all know how to write artist statements by now. I can discuss my process until eyes glaze over. I can explain the critique of Western power structures, of patriarchy, of a politics of destruction that reaches from the United States to the farthest corners of the globe and back again. But if I’m not saying anything that people don’t already know, why make this art in the first place?

These are the sorts of images that one would expect to possess a political intent. Of course the works are political in that they have to do with power, oppression, and victimization. But I have always had it in my head that “political art” seeks a concrete, almost measurable effect: to change minds, to alter the discussion, to convince, to teach. I’m not trying to do any of those things. In fact, I’ve never considered art a very effective agent of political change, not least because artists are usually preaching to the converted. Of course it’s thrilling to believe that one’s work has the power to illuminate, that one can reach into somebody else’s brain, pull the cord, and turn on the light. I’ve always heard that The Sportsman’s Notebook was instrumental in convincing Czar Alexander II to end serfdom in pre-revolutionary Russia. Perhaps the Czar really did need to be shown the misery endured by the serfs under his reign. But I wonder if Turgenev’s stories had an effect, not because they taught the Czar about an institution he knew very well existed and must have known produced misery, but rather because they struck an emotional chord that even a czar could not unhear.

I’ve always thought that the artist’s work is to express an understanding of the human condition. Perhaps this type of expression can, at times, educate an audience or change an opinion, but I believe it’s more proper to think in terms of sympathetic communication and a shared understanding. The artist expresses, in a clear, succinct (Proust notwithstanding), comprehensive way, something the audience already knows or feels. The effect is not to change minds or enlighten, but to provoke catharsis in the Aristotelian sense—the cleansing arousal and release of emotion. Such a goal might seem, in highly politicized times like these, as lacking ambition or weight. I don’t think so.

Late in the second chapter of The Sound and the Fury, Quentin Compson remembers a conversation with his father in which the older man conjures up an image of a “dark diceman” who not only tosses out man’s fate according to chance, but does not even care about the outcome of the roll. It would be absurd to believe that anyone reads this passage and thinks, “Well, ten minutes ago I thought the world was suffused with meaning, but now that I’ve read William Faulkner’s powerful and persuasive writing, I am suddenly convinced that my life and all life is, indeed, meaningless.” In actuality, we don’t learn anything from the passage. Instead, with a convulsive flash of intellect and emotion, we feel the idea that the world has no meaning. We feel it because we have felt it before. We don’t necessarily believe it as an ultimate conclusion about our existence—some of us might—but we have passed through the sensation, at some point in our lives, of the absurdity and blind chance outcome of the world. Faulkner has not convinced us of anything, but he has constructed the opportunity for a shared understanding, for communication in the deepest sense of the word. This heightened moment comes into existence thanks to the shocking clarity of the author’s vision—a vision that is singular and, at the same time, not singular at all.

We don’t step in front of Maya Lin’s Memorial because we want to learn something about the war in Vietnam. We already know how many soldiers died, we are not going to remember their names when we go home, and there is no other “information” in the work. I can’t believe that the Memorial changes anyone’s opinion; I would guess that it only hardens that opinion, no matter where on the political spectrum it lies. We go because the artist has produced a clear expression of feeling—about the War in Vietnam, about the cost of all war—a feeling that we already possess in some form. We go because we trust that Lin has done the work of the artist: to activate feeling, to crystallize understanding and emotion, to construct the space for catharsis. The work enriches us though we learn nothing that we did not know before and gain nothing of any utility. Perhaps that’s precisely why it enriches us. It teaches us nothing but reminds us of everything. 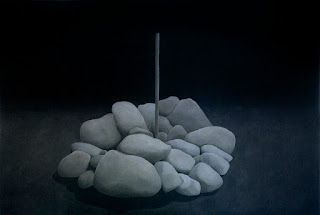 “The only real fucking is done on paper,” Pynchon writes in Gravity’s Rainbow, and it’s never been more true. Trump signs an executive order, and the rivers fill with coal dust. Not that it had ever stopped, exactly. But now they don’t even hide the collusion. Step on stage, let the cameras roll. Put ‘er there, Pal. Deal?

The collapsing of oppositions, of all categories and distinctions, has been brought to completion with the apotheosis of Trump. Politician or celebrity? Outsider or insider? Gangster or businessman? Friend or enemy? All of them golf at the same private clubs; all of them wear the same suit. We can’t hear what they’re saying, but we can see them shaking hands.

Ruler and ruled: that one's still in play. Power sits in a golden room and divides the preterite from the elect. How many kids did we kill today? We don’t count that high anymore.

In Glengarry Glen Ross, Al Pacino plays the consummate hustler who fills the space with words that mean nothing—until he goes in for the kill. Mamet depicted a hyper-masculinity which at the time had slipped into anachronism. “I swear, it’s not a world of men,” laments Pacino’s Ricky Roma. But now it’s a world of men again, men who wear long red ties like an amulet, who ride horses shirtless, who laugh all the way to Caymans. Put ‘er there, Pal. Deal? 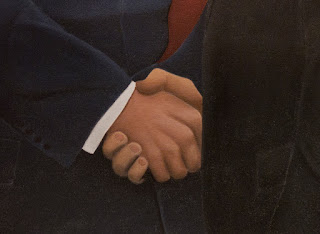 third verse, different from the first

I started my blog, Terrain, back in January of 2012. At that time I was making photographic abstractions and was fascinated by the correspondences that I saw between the work that I and other abstract photographers were doing and the work of abstract painters. The idea of the blog was to place photographs and paintings side by side in order to explore these common threads.

Ever since I began to paint in 2014, my work has taken a markedly different direction. I now consider myself a realist painter, and my subject matter is power: how power moves from the inside out, from the top on down, from West to East, from capitals to countrysides, from the powerful, through their agents, to the powerless below. But I’m still fascinated by correspondences. My paintings, for instance, have so far been based on news photographs, maintaining their connection to the real of world events. But they are also based on the reporting that I see, the reading that I do, and the writing that I create. More and more I’ve come to think of my art practice as multi-faceted, with the images occupying only the most prominent position in a nexus of seeing, reading, writing, and painting.

This interpenetration of news, critical theory, photographic images, essay writing, and most of all, painting, is what I'll be exploring in the future here on Terrain. Deal? 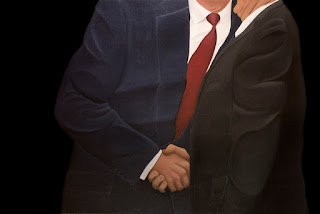