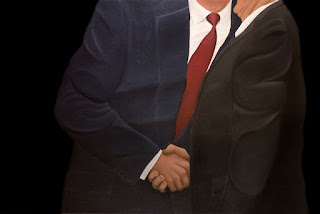 Every painting in my upcoming exhibit, Grip, features a male hand curled into a grip of some kind. In one painting, two men engage in a simple handshake; in another, a drone pilot clutches a bright red joy stick; in a third, a man thrusts his fist into the hair of the woman he is assaulting. "Touch" is one of the earliest of the images. When I made this painting, I was still working out my approach to the series: the deep black backgrounds, the simplified representational forms, the elimination of every extraneous detail—all of it was new, and the choices were mostly intuitive. In the photograph on which I based the painting, the officer making the arrest is plainly visible, full figure, from the rear, an anonymous representative of the law. Cropping out everything but his arm and hand was a simple decision based on a desire to focus on the figure in the white tee-shirt, whom I saw, from the beginning, as a victim of the criminal justice system. Later, when I settled on a title for the show, I liked the idea that the touch in this painting could be seen as a variation on the repeated motif of the grip. 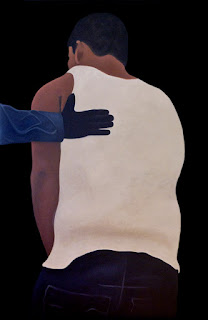 Of course I connected the image immediately to the phrase “the long arm of the law.” It was a way of thinking through the relationship of the concrete individual officer to the abstraction of the carceral state. Without quite understanding it yet, I was wrestling with a problem that Slavoj Zizek describes in his book The Year of Dreaming Dangerously: how to represent in art “the totality of contemporary capitalism.” This question arises during a discussion of The Wire, which series-creator David Simon describes as “a Greek tragedy in which the postmodern institutions are the Olympian forces.” The “totality” of “institutions” describes exactly what I’m trying to represent with the motif of the grip. It also describes why I eliminate virtually all identifying features of the people in my work. The paintings are not about the conflict between individuals, but rather, about how individuals are caught in the violent grip of contemporary institutions, whether that means capital, patriarchy, the militaristic state, or the prison-industrial complex.

The officer in the painting, from the evidence of the hand, is too small to possess any real physical mastery over the much larger detainee. But of course power doesn’t reside in the officer himself, much less his disembodied arm or the hand that touches the body. Power resides in the institution standing invisibly in the background, the anonymous totality that endows that puny hand with its Olympian weight. A fist can tighten around a lock of hair, fingers can crush a child's neck, but sometimes a touch is the firmest grip of all.
Posted by john rosewall at 3:34 PM No comments: